An exploration into buried landscape narratives: taking the cue from a monument to submariners in Govan’s Elder Park we use the technological exchange in WW2 between estuarine Scotland and Gdansk, Poland as a source of submarine narrative. In the process we find a shed and discover a witness to a detonation, who as a nine- year old boy became quite tuned to the exchange and who befriended a lost Polish Silesian battalion of soldiers. filmed on the Cromarty estuary – North East Scotland in July 2017 with thanks to Clem Watson as witness to a detonation and for opening his archive. 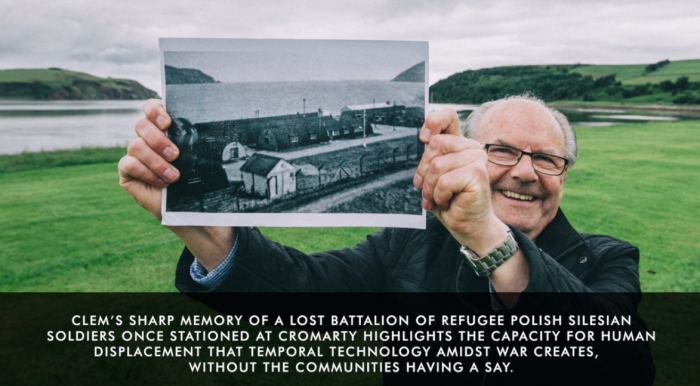 “Scotland witnessed  huge innovations in U Boat Control over 2 world wars.
Estuarine places like Cromarty and Gdansk ( then Danzig ) were involved In an exchange etched into the memory of many.”
Real time stories are hard to find and the Creative Scotland funded residency for architect / artist Andy McAvoy is allowing for one such story to be recorded and made into a Public record. Following a visit to Gdansk Andy is working with Polish Photographer Kris Kesiac to produce the record.